The XCode from Apple is a fantastic Rapid Application Development environment, but it doesn't offer a lot of functionalities to work with the svn system. So I have run around to find a good svn client to use together with XCode. On Windows I use TortoiseSVN, it's really the best client I found it is integrated in Windows and provides contextual menus into the explorer application. On SnowLeopard I found RapidSVN, it's not as powerful as Tortoise but it gives to all the functionalities I need.

Has you can read from the RapidSVN web site:

"We want to build a best of breed visual client that utilizes the best features of clients from other revision control architectures. While being easy enough for users new to Subversion to work with it must also be powerful enough to make experienced users even more productive."

RapidSVN can work with your own preferred tools, as companion tools I'm using the once provided with the Apple Developers Tools, so to edit file I'm using Xcode, while for the diff and the merge operations I'm using opendiff.

To configure RapidSVN you have to open the preferences window from the RapiSVN menu. 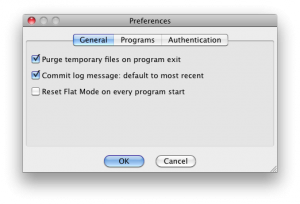 Go into the Programs tab and in the standard editor put /Developer/Applications/Xcode.app/Contents/MacOS/Xcode: 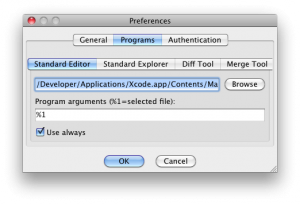 Then, configure the Diff Tool and the Merge Tool as shown in the following pictures: 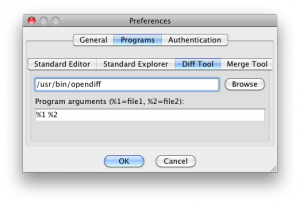 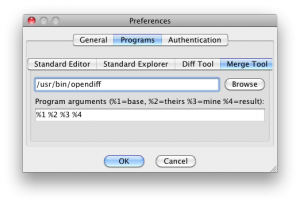 Last, configure the Authentication tab as shown below: 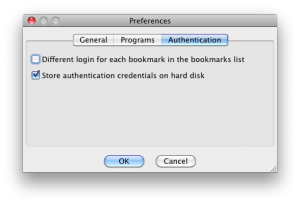 That's all, now your RapidSVN is fully configured with the standard Developers Tools.