The first time I powered up the Raspberry Pi I attached to it the USB Keyboard, the USB mouse and the 19 inch monitor that I normally use with my PC.

These objects worked fine with the Raspberry, but the problem is the following (money, money, money)

I don't want to buy additional hardware to work with the RAspberry and the PC at the same time, you know the first three reasons (money, money, money) the last but not least reason is that I have a small house and I haven't enough room for the new hardware.

The solution come from the Xserver, it provides the capability to remotize your system…..

"X is an architecture-independent system for remote graphical user interfaces and rich input device capabilities which allows many people to share the processing power of a time-sharing computer and to collaborate with each other through client applications running on remote computers. Each person using a networked terminal has the ability to interact with the display with any type of user input device. Due to the ubiquity of support for X software on Unix, Linux and Mac OS X, X is commonly used to run client applications on personal computers even when there is no need for time-sharing." Wikipedia

In this short tutorial I'm using the X included with cygwin for windows, but the 90% of the steps should work fine also on Linux and Mac OS X. 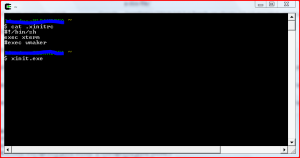 make sure teh .xinitrc file doesn't exec any window manager and that it launches at least one xterm (see the above picture), then run the xinit.exe application, if all is working fine you should see something like the following picture 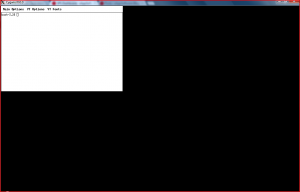 access control disabled, clients can connect from any host

After you have logged into the Raspberry, run the following commands:

Last, try to run a graphic application, for example xeyes

You should see two eyes following your mouse pointer !! 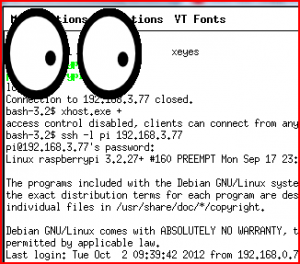 to have the full GUI of your Raspberry Pi working, simply issue the following command: 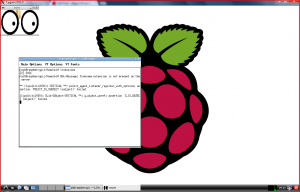